Bill Kaylor has been a recording engineer, audio technician, and studio installer in Los Angeles for over 30 years. He was the winner of this year’s Mogami Cable Premium Cable Package Giveaway contest, (promoted through social media in January), and now that he’s received the cables and put them to use, we reached out to get an update on how he likes them and what his experience has been so far with “the cable of the pros.”

Kaylor: I first started using Mogami cables back in the ‘80s when Marshall Electronics began importing the multi-pair cables. Their superior audio performance with oxygen-free copper, excellent handling, flexibility, and outstanding shielding made Mogami our go-to cable for all of our installations.

Long ago, I did a studio installation for a famous film composer using a competitor’s cable because the composer felt that Mogami was out of the budget. But after installation, there was so much induced noise and hum due to poor shielding that the room was totally unusable. After rewiring everything with Mogami, we got beautiful silence — that is until the music started. This composer could not believe the difference that wiring could make.

Mogami has been used in every studio I’ve ever built or worked in, and every studio in L.A. has Mogami cables somewhere — and the good ones, like Chalice Recording, have it everywhere!

I’ve installed rooms for everyone in my career. From private rooms for the Black Eyed Peas to Ray Charles’ studio, where I served as one of his engineers on the album “Genius Loves Company,” which won eight Grammys. The way I feel about Mogami is, as Ray would say, “All Mogami, Baby Baby!”

I am now the Chief Engineer at Chalice Recording in Hollywood, Calif., and I can proudly say that my rooms are 100% Mogami cable for all analog signals. Even all my patch cords are Mogami.

Chalice Recording Studios is one of the premier studios in Hollywood. A who’s who of top entertainers in the business have recorded and mixed there including Miley Cyrus, Beyoncé, Blink-182, Rihanna, Celine Dion, and many more. Kaylor says that Mogami has played a significant role in cultivating the studio’s renowned reputation.

Kaylor: Chalice Recording has five recording rooms with three SSL studios, multiple Pro Tools set ups, machine rooms, and multitrack recorders — and everything is completely wired with Mogami. Chalice’s Studio A is considered one of the best rooms in L.A., and Mogami plays its part in making it so. 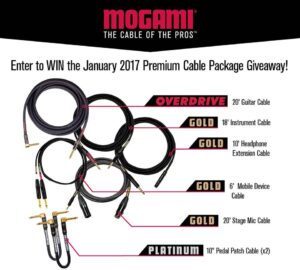 Kaylor: I love my Mogami instrument cable for both recording and live performances. It has a quiet operation and carries the true tone of my custom P and Jazz Basses. The switched plug is also a cool feature when changing instruments. I still cannot believe I won such a great collection of cables from a company I already buy from! Mogami has been used in every studio I’ve ever built or worked in, and every studio in L.A. has Mogami cables somewhere — and the good ones, like Chalice Recording, have it everywhere!

For more information about Mogami Cables, go to www.MogamiCable.com and check out more of some of the other top entertainers using Mogami Cable.