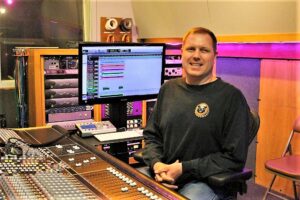 Dusk Bennett, Chief Engineer of the Recording Arts Department at Loyola Marymount University, knows that for students to be competitive in today’s audio engineering market, they need to have a robust set of skills. Over the 10 years that Dusk has been on staff at LMU, he’s seen the curriculum progress to incorporate different aspects of audio engineering that cover a wide variety of work, from recording audio Foley for cinema sound effects, to mixing live concerts and much more.

Dusk is an accomplished audio engineer and a graduate of the LMU audio program himself. He has worked with many local Southern California musicians and even helped revamp the audio equipment at the LMU facilities to include more high-tech gear, and of course Mogami Cable throughout.

We got a chance to talk more with Dusk about how the department teaches students competitive skill sets in a rapidly changing audio engineering market:

Mogami Cable: What is the program like at LMU?

Dusk Bennett: LMU has a unique audio program. We tend to take a holistic approach to audio, and each student is required to spend equal time doing film, live, and studio audio before they can obtain their degree. While many schools tend to push one audio discipline over another, which does have value, it can come at the expense of some of the more viable forms of audio employment.

By the time students graduate from here, they’ve done production sound, post sound, live audio, and music recording as part of their four-year experience. In many respects, the program is very much as it was when I graduated from here back in ’98, save for the live component part which we added after I came back as an employee.

Mogami Cable: What are the instruction facilities like for audio engineering?

Dusk Bennett: We have about 15 different spaces dedicated to audio on campus, and the labs can be anywhere from a small edit lab with an MBox and a computer to a full-blown 5.1 dub suite with a C|24 and an HDX system. Because our Recording Arts program also serves the Film Production program as well, we have 200-300 students a year coming through our spaces. As you can imagine, we get really busy towards the final three weeks of each semester. It’s maddening.

Mogami Cable: What kinds of recording equipment do you have in the rooms?

Dusk Bennett: We have a wide variety of workflows to accommodate here because of the diverse nature of our spaces. Some rooms are simple and equipped with just a basic Pro Tools rig and the usual over-the-counter plug-in bundles, whereas our dub suites are outfitted with much more robust hardware and specialized plug-in bundles. Our dub suites are each composed of a C|24 and a full HD rig with a passive JBL 5.1 system and Bag End subs.

On the main campus, our music studio is equipped with a loaded 32-channel API Legacy Plus console and a 32 channel Pro Tools HD rig. In addition to our sizeable plug-in investment, we have a ton of outboard hardware, my favorite pieces being the AMS RMX and Bricasti reverbs. For that room, we calculated that we used over 400 lines of multi-pair audio cable that were EDAC connections using legacy Mogami 48 pair cabling (I can’t recall the part number).

As I write, LMU is also investing money into several post-production rooms down in the new “Silicon Beach” area, which will become home to our Film Production MFA program in Fall of 2018. Once open, we will have a color room, motion capture stage, two Foley/ADR stages each with C|24’s, and two rooms with Avid S6’s. All audio rooms will be equipped with Avid HDX systems and networked via Focusrite RedNet. It should be an awesome space and a great location to do it all in.

Mogami Cable: You mentioned that you rewired the LMU Studios with Mogami years ago with the help of the students. How did that project go?

Dusk Bennett: It was a massive undertaking to get it all done but I had a lot of student help and the results have been worth it. When I got here all of the rooms had wiring problems. Old or poor-quality wiring, bad terminations, broken contacts, etc. I quickly realized it would take me forever to tear everything out and wire the rooms on my own, so I trained a group of student workers to help me finish the spaces. As they graduated we trained others. Once I felt they had a handle on the wiring, I focused my energy on the main music studio and other aspects of my job while they focused on the bulk of the spaces.

The students have been an integral part of my success here at LMU, and pretty much did the rewiring job with little oversight. I’m proud of what they did. Many of them are still close friends and all of them are working in audio professionally.

While many studios are simplifying and going more into the world of plug-in’s, we have doubled down on analog hardware because I remain convinced that an analog front end is now more important than ever, simply because so many delivery formats are forcing us to dumb our audio down. I’m equally fortunate to have departmental faculty that support this vision. Were it not for them this would have never made it past the budgeting process.

I loved working with [Mogami Cable] because it was so fast to terminate and easy to wrangle into place. It also tied into place more neatly and gave me the latitude to see multi-pair cabling as an art form in and of itself.

Mogami Cable: How did you first hear about Mogami Cable and what was your impression after your first time using them?

Dusk Bennett: Years ago, when I was a student at LMU I worked for a now-defunct studio on Sunset called Hollywood Recording Services. I started out as the Transfer Room guy and figured if I wanted to avoid making dubs for the rest of my life, I better learn to solder. So, I taught myself to solder using the scraps of Mogami lying around the studio. One day they mentioned they needed to rewire the Transfer Room, and I jumped at the chance to do it.

They brought in a private contractor who helped me finish it in a weekend. It was all Mogami, save for a few ends that had already been pulled into place. I loved working with that cabling because it was so fast to terminate and easy to wrangle into place. It also tied into place more neatly and gave me the latitude to see multi-pair cabling as an art form in and of itself.

I used to buy my cable supplies from Yale back then because they had the purple flexo-sleeves and I wanted all my ends to be purple and black. The studio thought I was crazy. They didn’t get it — I didn’t care. I was into the aesthetic of it all. The funny thing was (as you would guess) nobody cared about how pretty my wiring was, they were just happy that things worked and sonically the improvement was noticeable.

Over time, of course, I have been forced to work with other brands of cabling, and I’ve come to appreciate what Mogami offers me both as a technician and as an engineer. I’m happy with the look and the sound, so much so that I wired my own room at home with all Mogami. I have a vintage Neve 8014 and a Studer 827 with a bunch of analog outboard, and at least five 96-point TT bays worth of cabling. It’s all Mogami. Obviously, I’m a huge fan.

Mogami Cable: Is Mogami used primarily throughout the LMU studios? What kinds of Mogami Cable do you use?

Dusk Bennett: Pretty much every scrap of wire that could be converted to Mogami was swapped out. We tend to keep a balance of small pair counts to larger pair counts to allow us to use the larger trunks for transmission lines and the smaller pairs for breakouts. All multi-pair lines are flexo-sleeved with different color schemes to make cables easier to ID in a dark rack and to provide a finished look to them.

Mogami Cable: Is soldering cable something you teach students?

Dusk Bennett: I require every student that works for me to get a handle on how to terminate using flexo. It’s not uncommon for former students to come back and thank me for forcing them to learn it. They have all used it in their day-to-day lives as engineers in the “real world,” and some even do it for profit.

Mogami Cable: Are there any former students you have taught that have gone on to critical acclaim?

Dusk Bennett: Many of my former students are working on high-profile projects. One has worked with Hans Zimmer, a couple currently work at Disney Imagineering, one is at Interscope Records, and several work at high-end post studios. A few are working in live audio and one of my first prodigies, “Linny,” became the main engineer for Edward Sharpe and has made a solid career for himself since then.

I know some have even won awards for their work, but to be honest I can’t recall who won what anymore. When we get together we end up talking about craft beer and vintage gear anyways, so our success almost seems irrelevant.

When students ask me how to future proof themselves in the music engineering business, I tell them to learn broadcast or live audio to be certain of employment.

Mogami Cable: How do you think the recording arts industry will evolve over the next five years, and how might this affect LMU’s curriculum?

Dusk Bennett: More and more we are seeing students shy away from our actual studios in favor of working at home in their PJ’s on a laptop. I don’t blame them really; the convenience is awesome and all I have to do is hand over an iLok to a student. We used to watch students jockey for studio time during the crunch period, now they’re getting into fights over dongles instead.

We have instituted a heavy investment into 500 series technology because of its portability and low cost. Rather than spend a ton of money on redundant studios, we have purchased Mboxes and 500 series Lunchboxes, so students can check out Class A hardware and record at home. I see more of that happening, especially since enrollment keeps going up but our square footage doesn’t.

I think sooner or later the industry will have to come to terms with high-resolution audio focused towards the delivery side as opposed to the production side. 48/24 is good enough for me, I want to move beyond an mp3 for delivery.

I’m also still a firm believer in a tape-based workflow, and I’d like to think that it’ll catch on again like vinyl did. The upside of the vinyl resurgence is that it demonstrates that people are willing to spend a decent chunk of change on music again, they just need a reason to do so. We have a lot of music creators these days, but not enough music consumers to balance it off. For this reason, when students ask me how to future proof themselves in the music engineering business, I tell them to learn broadcast or live audio to be certain of employment.

Learn more about Mogami Cable by checking out our other blogs: