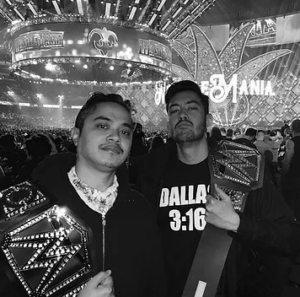 The biggest knock on electronic music today is that the music is merely “press play” during live shows. To remedy that, Nerdmatics [pictured left: Chris Legaspi and Fred Carlton] have been creating custom sound and lighting systems to enable artists to really experiment and improvise with their sounds live while they’re on stage.

As the list of high-profile artists Nerdmatics has worked with continues to grow, with Halsey, Drake, Big Sean, Kendrick Lamar, Odesza, and The Glitch Mob as just a sampling of their jam-packed client list, the Nerdmatics team is garnering more and more mainstream attention now for their innovative custom setups.

Mogami Cable got a chance to talk with Fred Carlton of Nerdmatics, to find out more about how they make these rigs, how they come up with the ideas, and what the future has in store for these digital audio visionaries.

Mogami Cable: Tell me a little about Nerdmatics and what you guys do.

Fred Carlton: We are a two-person team who build playback and MIDI backline systems. These systems are for redundant computer setups, allowing bands to connect their computer and send MIDI to trigger audio, control lights, and any other show control needed. Another service we offer is custom software programming. We build network systems, so you can pass data to multiple computers (audio, lights, and video) and translate that data into another language if needed.

[Above] An example of Nerdmatics systems in action for The Glitch Mob’s live show.

Mogami Cable: How did the company get started? What year was Nerdmatics founded?

Fred Carlton: Chris Legaspi and I started working for Thirty Seconds to Mars in 2010. Chris was keyboard and systems tech and I triggered the playback and played samples. While on tour, we saw a lot of live acts and realized there was a market for this type of work. We really like working with different artists, as everyone has a different live show and needs different things.

Mogami Cable: What specific kinds of Mogami cable do you typically use? Do you buy bulk and solder the ends or buy complete cable?

Fred Carlton: I usually use a combination of both. Most playback systems have a D-Sub output that needs to become a male XLR, and some systems need TRS to Male XLR fanouts. On DJ projects where we have to run into the mixer, we use TRS to RCA. For custom builds, I have to do a lot of right angle XLR and TRS and at a custom length. Sometimes when running five-pin DIN MIDI we make our own XLR to DIN converter cables to do long MIDI runs with XLR.

[Above] A picture of an intricate network setup that Nerdmatics has become known for. This picture shows the network hub, where all the data for audio, video, and lights runs through, and where audio interfaces connect to computers that then connect to speakers.

Mogami Cable: How did you first find out about Mogami cable, and why is it your preferred cable?

Fred Carlton: I first heard about it when one of my friends was playing guitar on a big tour and showed me his pedal board, which was all wired with Mogami. I went to Tour Supply in North Hollywood and bought some of my own to make patch cables and got to work with it first-hand. The quality has always been outstanding, which makes a big difference when you are making custom cables, running long distances, and using it for recording. The D-subs are super high-quality and have a flat-head insert so you do not have to hand tighten, which is a huge plus as some of the rack systems are lacking in space or are really deep.

Mogami Cable: How do you guys keep all of your cables organized when you make rigs and setups?

Fred Carlton: We try to color code everything to keep it manageable. But now a lot of systems are using BNC, so luckily technology is making things simpler on the cable side.

Mogami Cable: How do you come up with the ideas for these rigs? Do artists usually approach you with an idea, and then you guys make it happen, or do you build something and find an artist that wants it?

Fred Carlton: A lot of times we first talk to the artist and ask what they are looking for, then we design what we think would work and have the artist come and critique the system so it does exactly what they want. An example would be with Majid Jordan.

Jordan had previously used an analog synth and an 808-drum sequencer to play along with backing tracks from Ableton. I set up a MIDI keyboard that could have multiple patches he could change with an iPad. I then got him an AKAI MPD 232 which can sequence MIDI to a drum track in Ableton. He can also use its pads to play those samples.

This new digital version of his system allowed him to have unlimited keyboard patches and drum samples and to recall them anytime during the show, while also being all synced to the clock to keep everything in perfect time. Because it’s all MIDI, it’s going to the main and backup system, so if there is a failure he can instantly switch to the backup system and his MIDI will already be connected and working, and the audience won’t know there was an error.

[Above] Nerdmatics testing out their setup for Majid Jordan.

Mogami Cable: Describe one of your favorite rigs you made? Who was it for?

Fred Carlton: I think one of the cooler systems we built was for Intel. We helped them with their keynotes for CES in 2016, which they used the same rigs for in 2018. For CES 2018 we built three identical racks, so we could rehearse in multiple locations (stage, backstage, and offsite rehearsal). The system had two Mac Pros and two Mac Minis, and each computer had its own audio interface.

I also have a wireless in-ear system and a wireless lapel mic system. These both have custom cables, one goes from the lapel system into the XLR turnaround to be split to both systems. The in-ear mixes are being pulled from the Radial SW8 so that if the A computer fails we can switch to the backup and instantly hear it in the in ears.

[Above] Fred Carlton [left] works the controls at CES 2018 for Intel’s presentation.

Mogami Cable: What are your plans for the future of Nerdmatics?

Fred Carlton: We are hoping to keep advancing with technology to keep live shows as live as possible. There are a lot of live performances that are predetermined and are the same every night. We are hoping to help artists implement technology so that the data they create when they perform can be sent to other systems which will reinterpret that data into other mediums.

Learn more about Mogami Cable by checking out our other blogs: